Many works of art have
a story to tell.

Some are created because they were commissioned, others may have as simple an explanation as it reminded the artist of somewhere they’ve been. Some artists have no story behind their creation, and simply describe it as an expression of a moment, or a release of emotions. These are all legitimate explanations that often satisfy the individual buying the art. In fact, some never ask why an artist created a certain piece, and are completely content in the pleasure it gives to them.

Such is the case with most who have been enchanted by the art of local artist Jeanne Gordon. But the story behind Gordon and her art makes those pieces all the more cherished.

“All my life I was involved in creative projects,” Gordon says, “with six children there were always plenty of Halloween costumes and craft projects, but there was never any time to sit and paint.” That dramatically changed, however, when in the summer of 2006 a bicycle ride with her oldest daughter resulted in her daughter’s death and Jeanne becoming a quadriplegic. Although the tragedy was devastating for everyone, Gordon discovered a cathartic process in art.

While at the rehabilitation hospital, she began to draw. It was there that her first tools were created: a pencil attached to a dowel, a rudimentary mouth guard, and a makeshift easel. “I took it to my room,” Gordon recalls, “and lo and behold, I drew this little violet. I was amazed. With that tiny flower I knew I could do it.”

Interestingly, Gordon had always found inspiration in the life and teachings of Saint Thérese of Lisieux, also known as the “Little Flower.” Saint Thérese taught a simple path of spirituality referred to as the “little way”—that God is everywhere and can be fully experienced in the love and goodness within us as we go about the ordinary, simple details of life.

Soon, with the assistance of a dental technician, a mold of her teeth was created so she wouldn’t have to bite down on the dowel, and a fishing rod was adapted as a handle to a brush. Her caregivers, a daughter and son, then took her to a lake. “They set me up with some paints and I painted three pieces right off the bat,” she remembers, “and there’s been no stopping me ever since.”

Eventually, through the persistent coaxing of family and friends, Gordon decided to reproduce her art in greeting cards. From there, the demand for her art resulted in commissioned works as fundraising pieces for local organizations, such as the Lord’s Diner, Sedgwick County Zoo, and Botanica. Her subjects include animals, birds, flowers, fruits, Saint Mary and other religious themes, trees, landscapes, and nearly anything else. So far, there hasn’t been anything she’s not been able to paint.

I’m always asking God to help me accomplish the piece I’m working on,” Gordon says. “Then, with each stroke I take it feels like I’m giving back His glory. Life’s what you do with it. You choose to be positive. I love painting. I can lose myself for hours. In fact, I’m notorious for not taking a break.

At first, Gordon was constrained to doing small pieces, because her easel was attached to her wheelchair. Later she had  a new setup that permited her to work on a larger canvas. “It also helps give me different perspectives,” she explained. “ I can sit and look at it from a distance and form my plan of attack. It’s totally different. I now have free rein,” she says with a smile. 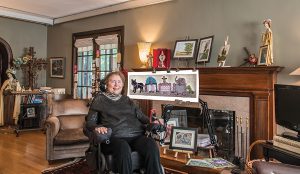 While some may focus on the tragedy that led to Gordon’s art, she was ever mindful of that little violet and how it changed her life.

Everything you do, no matter how little it is, can be a prayer” Gordon remarks. “God graced me with a creative outlet. I’m so grateful.

Although Jeanne Gordon passed in December, 2016, her greeting cards are still available locally at Maxine’s, Beard’s Floral Design, Dandurand’s, Plaid Giraffe, Trios, and at the Etsy store MouthstickARTbyJG. The original works of art can be viewed and purchased through the website MouthStickArt.com.

At Maxine’s you can select a print, and they’ll add the copy you want, and reproduce as many as you need for your special occasion. There are styles suitable for business and personal use.—By Kathy Heaton, photography by Patrick Wherritt.