You would hardly think of your great-grandparents’ vegetable garden as a family heirloom, but the seeds from that crop are things to be cherished and passed on down the generational line. Heirloom plants sometimes have an interesting backstory, too, just like that piece of antique furniture or gem necklace that belonged to your ancestor.

Heirloom plants come from pre-World War II farmers and gardeners who grew open-pollinated crops, or crops pollinated naturally by wind and insects. Their yield was a mixed bag of fruits and vegetables that varied in color, shape, and size. They took seeds from the most desirable ones and saved them for future generations to plant and enjoy.

That’s what makes heirloom plants different from the dime-a-dozen fruits and vegetables we see in the supermarket. Most store-bought produce consists of hybrids—specially tailored plants that big companies depend on for their productivity, consistency in appearance, and survivability when it’s time to ship them to stores across the country. According to heirloom gardeners, quality went by the wayside when agriculture became industrialized. Nothing, they say, compares to the taste of an heirloom tomato or the fragrance of an heirloom rose.

These authentic traits are disappearing as more heirloom plants go extinct. Historic records show that more than half of the different varieties of bean, tomato, corn, and other fruits and vegetables have disappeared; 86 percent of apple varieties are gone; globally, we’ve lost 75 percent of farmed plant diversity. 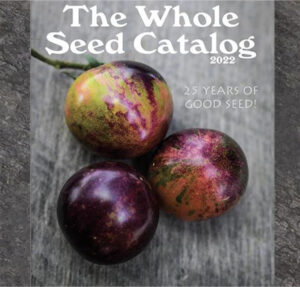 But there are places that grow heirloom plants and harvest the seeds for anyone to buy. Order a Baker Creek Heirloom Seeds (or download their digital version) at www.rareseeds.com.

Photo above: Transplanting densely planted tomato and hot pepper seedlings to larger pots, also known as potting up, on an outdoor potting bench in spring in a home garden.