After the fall of Rome, the Middle (aka Dark) ages were a stark contrast to the previous periods.

The focus on artistic endeavors, which include decorating one’s abode, abruptly slipped into the existence of austerity. The constant wars of medieval Europe from the Gothic period through the Tudor period created a somber era, and the interiors of even the wealthiest reflected this. 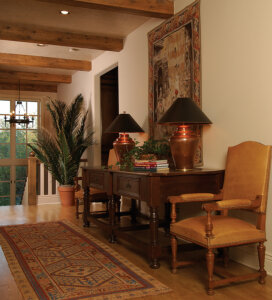 As the name implies, the following Renaissance period in Europe was a time of renewed interest in art and related home furnishings.

This movement originated primarily in Italy and France, although the early Jacobean style was communicated through German woodcarvers. Again, the craftsman of the period influenced what people had in their homes. And to be clear, the woodcarver’s designs were influenced by culture and religion. .—By Philip Holme